@adater: The Avs are 1-4-2, but am I stressed about it? No, and you shouldn't be either [Vous devez être inscrit et connecté pour voir ce lien]

@Avalanche: "I want us to be ready individually tonight. If we do a good job individually, we'll have a good night." 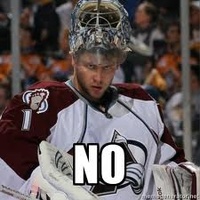 Forty eight shots on net. Seven goals. For the Avs, that was too close to their stats from the first seven games. But it was the output tonight in a 7-3 romp against Eddie Lack and the Canucks (sounds like a bad band name).

As I so wisely stated the other day, better days would be ahead for the Avs. But that’s enough back-patting for one night.

Look, the Avs should have won this game. They got the backup goalie on a team playing the second of back-to-back road games. So let’s not get at all carried away with the one win, just like we shouldn’t have gotten too carried away with the 1-4-2 start. It’s going to be a long, hard slog for any team in the Western Conference, and now it’s on the road again to Winnipeg for a Sunday afternoon game – the kind of game that might be a weird one I have a feeling.

But this team is going to win games. There’s simply too much real good talent up front, Semyon Varlamov – though he was a bit off tonight I thought, and understandably probably, playing for the first time in about 10 days – is a fine goalie and the defense, while a worry, isn’t as bad I don’t think as much as others might.

I’ll tell you another big reason why I think things not only are getting better, but will continue to get better: John Mitchell.

John Mitchell, to me, is in the top five of the most important players on the team. His presence as a third-line center just stabilizes the rest of Patrick Roy’s team so much. He’s strong defensively, he does things offensively that can cause problems for the opposition, and above all, he’s a smart player. Does he hold on to the puck too long sometimes? Yeah, hence the nickname “Johnny Malkin.” But the counter-point to that is: well, at least he has the puck a lot.

The Avs’ puck-possession, fancystat Corsi-Fenwick numbers have already gone up a lot since Mitchell came back from those migraines. I’ll submit: the Avs win that first-round series against Minnesota if they have Mitchell in the lineup. No doubt in my mind. His loss just killed the Avs in the end. But he’s back now, and feeling good and the Avs are automatically a different team with him.

– Zach Redmond looked pretty good to me. A little jittery at first maybe, but after a while I thought he was skating well and doing aggressive things, and he also got a third-period assist. One would have to assume it’s his job to lose now, even when Ryan Wilson comes back.

– Jarome Iginla has always been a slow starter, but then he gets really hot and good things happen for a long time. So consider tonight his warm-up act. I’ll have a story on him Sunday where he talks a lot about his career.

– Matt Duchene was really good and really focused tonight. He was tremendous, earning my first star of the game. One observation about his game: it’s a lot better when he kind of just goes with a real hard north-south, kitchen-sink approach. Meaning: He just skates hard, throws the puck at the net and lets things happen in a chaotic sort of way. When he tries to get “officially fancy”, i.e. passes to himself between the legs or holding on to the puck longer than needed looking for the perfect play, things don’t go as well. But when he’s kind of out there free-lancing and just burning rubber, it creates chaos for the opposing defense and more pucks go in. I don’t have that quantified, but it’s my observation.

– Gabe Landeskog got a lot better as the game went along. And don’t discount what happened here: right after Daniel Briere was cross-checked into the boards by Canucks goon Derek Dorsett, Landeskog flattened Canucks defender Yannick Weber with an equally dirty hit into the boards. I’ve said it before and I’ll say it again: you can’t take being pushed around by the bullies in life. You can get even on the scoreboard, yeah, but in hockey you also have to answer the dirty deed somehow with a physical pushback of your own. The Canucks seemed to get the message pretty good that there would be a serious price to pay physically if they wanted to keep doing stuff like Dorsett did to Briere, and, surprise, they were pretty quiet after that.

• Cody McLeod surpassed 1,000 career penalty minutes with his first period fighting major (now 1,004)…He becomes the first player in Avalanche history and sixth in franchise history to surpass 1,000 PIM.
• Tyson Barrie tied his career high with three points (0g/3a)…Tonight marked his second career three-point effort, as he also had three assists on Feb. 8, 2014 at NY Islanders.
• Barrie, Iginla and Duchene all posted the first three-point games by an Avalanche player this season…Iginla was also the first Avs player to record a multi-goal game in 2014-15.
• Tonight marked Iginla’s 91st career game with three or more points.
• With an assist tonight, Alex Tanguay moved past Valeri Kamensky (414) for sole possession of ninth place on the franchise’s all-time scoring list with 415 points…Tanguay has 415 points (144g/271a) in 474 games with the Avalanche.
• Semyon Varlamov earned his 79th victory as a member of the Avalanche, tying Mario Gosselin (79) for sixth place on the franchise’s all-time wins list.
• Jan Hejda tallied his 100th NHL assist.
• Colorado’s 48 shots-on-goal were a season high and equaled the club’s largest output of last season (48 on Dec. 16, 2013 vs. Dallas).
• The Avalanche’s seven goals were also a season best and also matched the team’s best scoring game of the 2013-14 campaign (7-1 win on Feb. 1, 2014 vs. Buffalo).
• Tonight was the Avalanche/Nordiques’ 70th regular season victory over the Canucks (70-57-15-

, equaling the franchise’s most wins versus any opponent…Colorado/Quebec also has 70 wins versus Carolina/Hartford.

@DubFromAbove: Red Deer Rebels captain Conner Bleackley named #WHL Player Of The Week. He had a goal and 5 assists in a pair of weekend wins.

While losses continue to pile up for the Avalanche, optimism continues to radiate from Colorado coach Patrick Roy.

"I think it's positive," Roy said Wednesday from the Avs' practice facility after the team had a minor, off-ice workout.

"There's nothing wrong with going through some adversity right now and learning how to win those close games. It's part of the process," he said.

Less than 24 hours after the Avs lost at home to the San Jose Sharks — a 3-2 shootout loss Tuesday that forced Colorado goaltender Semyon Varlamov into 49 saves — Roy gave his team a practice breather and they didn't skate.

Colorado, through 10 games, has just two victories, falling to second-to-last place in the Western Conference, just one point ahead of Arizona.

Roy, though, remains confident the Avs will turn their tide. To illustrate, he quoted a former teammate in Montreal and Colorado.

"Mike Keane one time said: 'You know what, if you're playing bad, it doesn't mean you have to lose the game,' " Roy said. "And yesterday was a good example. This is a game we'd like to win 2-1. Varly is allowed to steal a game for us. To us, he's one of the best goaltenders, if not the best, in the game. We have to take advantage of it."

Roy said the key for the Avalanche is knowing when to press and when to be patient.

"Right now, because our game management is not quite there, instead of winning 2-1, we're losing 3-2," Roy said. "We have a lot of leads. In almost every game, we were ahead or tied in the third period. We've had plenty of chances."

The Avs — a 112-point team last season when they finished second in the West — remain on track for the playoffs, Roy said.

"What I like right now is, we're in the mix," he said. "We think a good objective right now is 96 points, to be in the playoff dance. And right now, we're right there.

"You win two, three, four games in a row and you're back around .600. That should be good. But we need to do that. It's hard to believe today, because there are holes in our game, but it will help us tremendously and I think we're going to win those games."